Breaking News
Home / Drinks / The Best Food and Drinks You Can Have in Economy, From Afternoon Tea to Ramen

The Best Food and Drinks You Can Have in Economy, From Afternoon Tea to Ramen

Fitnetion September 2, 2022 Drinks Comments Off on The Best Food and Drinks You Can Have in Economy, From Afternoon Tea to Ramen 127 Views

Airplane food has gone through a series of changes since commercial aviation first took off, starting with only cold food selections in the 1920s and growing to include everything from regional delicacies to eclectic snacks and drinks today. Passengers flying economy today will find goodies and drinks ranging from the Percy Pig and Tim Tam biscuits to ramen, udon, and Cadbury hot chocolate. As the flag carrier of Ireland, Aer Lingus offers travelers a range of goodies that come from the country, including a traditional Irish breakfast available on flights within Europe that consist of sausage, hash browns, tomato, and black.

White pudding served alongside McCambridge’s brown bread, Irish butter, marmalade, and orange juice. Afternoon Tea — Virgin Atlantic Travelers can enjoy “Mile High Tea” when taking flights from the U.K. with Virgin Atlantic, with a range of goodies created by master pâtissier and celebrity chef Eric Lanlard. The tea service features freshly made rolls and scones, with economy options including a scone stuffed with jam and cream, and a roll filled with slow-roasted tomatoes, mozzarella, and green pesto. Offered in each cabin. 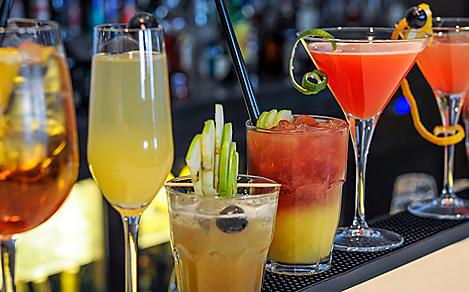 Korean Air has a range of popular delicacies to choose from, ranging from stir-fired spicy octopus with rice to its signature dish, bibimbap. The airline’s ramen is a popular choice, while long-haul flights also feature dishes like Samak gimbap, pizza, and shrimp-flavored Korean snacks like Saewookkang. Passengers are also treated to a special rice cake served as a snack on some European routes.

Japan Airlines has been offering its JAL AIR MOS series, a collaboration between JAL and local burger chain MOS Burger, since 2011. The menu features creative burger selections like a cream cheese teriyaki burger or a yakiniku rice burger. Keep an eye out for dessert cream puffs stuffed with everything from green tea to strawberry fillings. AL also offers a sky bento box for economy passengers on Korean routes flying to or from Japan. The complimentary mineral water offered to guests comes straight from Japan’s Niigata Prefecture.

I’m a health blogger by passion, and I love connecting people with information about health and wellness. I’ve been blogging for years now and I’ve learned a lot through that journey. In addition to writing, I’m also an avid reader and listener of podcasts. I believe in a healthy lifestyle and want to encourage others to reach theirs. That’s why I started my blog ,fitnetion.
Previous Davis PD investigates reports of possible drugged drinks, sexual assault
Next Baby Boomers are binge-drinking more than Millennials. Here’s why